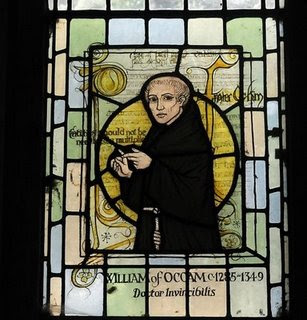 The goal of Daily Medieval is to present a sampling of the infinite array of information about the Middle Ages in small, digestible amounts. It offers a taste of the thousand years of people, events, and ideas that don't get covered in the streamlined history books of standard academic courses. To that end, it tries to avoid those things that people "already know" and focus on the lesser-known lights that shone at the foundation of modern civilization. Sometimes, however, the obscure overlaps the well-known, and I find myself "forced" to write about something or someone that I worry is known well enough that the daily entry won't give the reader anything "new." My goal then becomes to broaden the reader's knowledge in unexpected ways.

Which brings us to William of Ockham. I would be surprised if readers of Daily Medieval had not heard of Occam's (or Ockham's) Razor, a guiding principle that says one should not make more assumptions than absolutely necessary to try to explain something.

William of Ockham (c.1285-1349) was responsible for so much more, however. Believed to have been born in Ockham in Surrey, England, he wrote about metaphysics, logic, theology, politics, and more. All this writing, however, happened when he left Oxford University in 1320 without a degree in theology. The prevailing theory for this unexpected departure is that he would not acquiesce to changing his commentary on the Sentences of Peter Lombard, a common part of the final examination for university students.

The basis for the theory is how the situation blew up years later. Ockham was summoned to Avignon to appear before Pope John XXII and a committee that would examine his writings. The committee, chaired by John Luttrell (an ex-chancellor of Oxford) found 51 heresies among William's commentary on the Sentences. It is believed that William escaped punishment by appealing to the Holy Roman Emperor (at the time, Louis IV), who was not always on good terms with the pope, saying to him "You defend me with the sword and I will defend you with the pen." In effect, he placed at the disposal of the Emperor his intellectual gifts, which (if this story is true) must have been known to be considerable for this ploy to work.

How did William earn his intellectual reputation? Between leaving Oxford in 1320 and arriving in Avignon in 1324, he spent three years in a Franciscan monastery, writing prolifically. One of the topics he put his mind to was whether priests should be allowed to own property. Franciscans believed priests should live a life of poverty. This put them into conflict with Pope John XXII, so the summons to Avignon and condemnation may have had more to do with that question than his Oxford writings.

Besides challenging the Church's ideas about material wealth, he was also challenging the ideas of people like Thomas Aquinas that reason was sufficient to determine everything we needed to know about the world.

But that's a story for another day.
Posted by Daily Medieval at 7:00 AM