Birth of a Medievalist 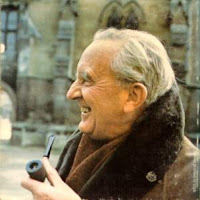 This is a slightly different tack for DailyMedieval, but many fans of his fiction are unaware of his career as a medievalist.

John Ronald Reuel Tolkien (3 January 1892 - 2 September 1973) graduated college with a specialty in Old Norse before he went not fight in World War I. After the war, his first job was working for the Oxford English Dictionary, reviewing the history and etymology of Germanic words. He became an expert in Old Norse, Old English, Middle English, Old Icelandic, Gothic, and Medieval Welsh. He also taught himself some Finnish.

Later, at the University of Leeds, he produced A Middle English Vocabulary and a translation of the poem Sir Gawain and the Green Knight that is still in print.

One of his most significant additions to medieval studies was his long essay "Beowulf: The Monsters and the Critics." Delivered as a lecture in 1936, it argued for the beauty of the poem as Early English literature. Up to this point, Beowulf had been used largely as a primer on the language of Old English/Anglo-Saxon, and picked apart for its references to places and names that could be matched to historical facts.

He describes the attitude toward the poem with a parable:


A man inherited a field in which was an accumulation of old stone, part of an older hall. Of the old stone some had already been used in building the house in which he actually lived, not far from the old house of his fathers. Of the rest he took some and built a tower. But his friends coming perceived at once (without troubling to climb the steps) that these stones had formerly belonged to a more ancient building. So they pushed the tower over, with no little labour, in order to look for hidden carvings and inscriptions, or to discover whence the man's distant forefathers had obtained their building material.

His essay created an atmosphere in which Beowulf could be seen as a poem worthy of being treated as a poem, not as an old document to be studied simply for clues to language and criticized as a dish-mosh of paganism and Christianity, mingled stories of heroism and monsters, history and myth.
Posted by Daily Medieval at 8:30 AM No comments:

Ultima Thule, or the "ultimate Thule," was first described about 300BCE by a Greek explorer named Pytheas. It was supposedly about six days north of Britain, a place so far from the natural world that land and sea and air were no longer separate substances, but instead formed a strange mixture in which one could not survive.

A thousand years after Pytheas, Isidore of Seville (mentioned here, also involving astronomy) explained Ultima Thule as being so far north that there was no daylight beyond it, making the sea cold and sluggish.

As stories of explorers (verified or not) appeared, Thule was identified and re-identified with lands farther and farther from mainland Europe. St. Brendan's voyages suggested new lands that historians thought might refer to Thule. The later Middle Ages decided it must refer to Iceland or Greenland. In early modern times, Norway became the candidate to explain early stories of a land that far north.

In the 20th century, the idea of Thule was co-opted by certain German writers and politicians as the legendary origin of the Aryan race. Fortunately, the 21st century has given it a new connotation.
Posted by Daily Medieval at 7:00 AM No comments: