I have written about Muslim-Christian relations before (here and here). Conflict between the forces of Western European culture and the Arab world has been going on for centuries, with atrocities on both sides. One of the earliest atrocities was committed by King Richard I, called Lionheart. 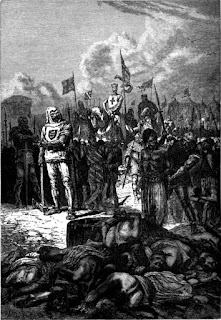 Ayyadieh
After the fall of Acre during the Third Crusade, there was an agreement between Richard and his opponent, Saladin, to exchange prisoners.  Richard was willing to give up about 2700 hostages (men including soldiers, women, children) taken in Acre for 1600 Christian hostages held by Saladin. Richard also demanded 100,000 gold pieces and the True Cross.

Richard was an impatient man at best, and he wanted Saladin to release the Christian hostages first. Saladin, a powerful and proud man in his own right, of course demanded in turn that Richard release the citizens of Acre. Negotiations broke down. Richard decided to teach Saladin a lesson in delaying the fulfillment of Richard's demands.

On either August 16th or 20th, 1191, Richard had his captives to a hill called Ayyadieh, where they were in sight of Saladin's army. He had them all put to death. This enraged the watching army, who charged the Crusaders. Richard, however, had plenty of forces there, and they were able to retreat safely into the city.

An eyewitness Kurdish chronicler in Saladin's army, Baha ad-Din ibn Shaddad, claimed in his chronicle that many Crusaders did not approve of this particularly callous treatment of prisoners. Christian chroniclers do not mention that there were women and children, leading the reader to assume that only soldiers were massacred.

Saladin, outraged, and also know for harsh treatment of his hostages, had his Christian prisoners executed. The True Cross was sent to "Damascus, where it was said to be buried under the portals of the chief mosque." (The Dream and the Tomb: A History of the Crusades, by Robert Payne, p.239)

Posted by Daily Medieval at 1:35 PM No comments: