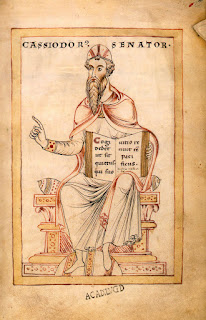 Yesterday's post mentioned Cassiodorus (c.485-c.585), a contemporary of Boethius, and his description of the relationship between Arithmetic and Music. His full name was Flavius Magnus Aurelius Cassiodorus Senator. He was not a senator; that was part of his name, although he was a statesman under Theoderic the Great, king of the Ostrogoths.

He served in several different roles in government, and his literary skills were so well recognized that he was often asked to draft important documents while he was in Ravenna. (Why Ravenna and not Rome? That is for the next post.) Whether because he was a devoted statesman, or just because of personal inclinations, his writings try to unite the cultural differences between the Eastern and Western Roman empires, between Greek and Roman cultures, between the Roman culture and the invading Goths, and even between established Christian doctrine and heresies. After his retirement from public life, he founded a monastery and turned to writing about religion.

The immediate reason for bringing him up in a medieval blog, however, is his link to medieval universities, which didn't exist for several centuries after his death. We are familiar by now with the medieval curriculum of the trivium (Grammar, Rhetoric, Logic) and the Quadrivium (Arithmetic, Music, Geometry, Astronomy). You might be surprised to know that Cassiodorus not only listed these fields of study, in that order, but also that he derives them from the study of the Bible.

In his Expositio Psalmorum ["Explanation of the Psalms"], he interprets Psalm 18.5


"Their voice resounds through all the earth, and their words to the ends of the earth"

as the teachings of the Bible being spread throughout the world, and that these teachings are the origin of secular studies. Therefore, mastering the secular arts helps bring one back to better comprehension of the Bible. This was, in fact, considered the original purpose of medieval universities: to train better clerics.
Posted by Daily Medieval at 8:00 AM No comments:

The Philosophy of Music

Much of the medieval attitude about music and its forms came from Boethius (c.480-524 CE). In his de institution music [Latin: "On the laws of music"] he distinguished three types of music:

Although today we use the word "mundane" to refer to something ordinary, it comes from Latin and refers to the world; Boethius uses it to refer to the music made by the world, that is, the so-called "music of the spheres": that sound, inaudible to human ears, that was made by the friction of the spheres surrounding the Earth in which the planets and other heavenly bodies traveled.

Instrumental music referred to music made by one of several different agents. It could come from something under tension (such as with stringed instruments), by wind, by water, or by percussion. It should be noted that Boethius was not referring to "musical instruments" as much as he used the term to mean that some physical agency was causing the sound. That could be a rushing stream, the wind in the trees, and falling rocks as much as manufactured devices in the hands of a musician. Later writers included singing as part of this category.

Human music was therefore not referring to singing by humans. For the Middle Ages, "music" was all about harmony, and the "harmony" between the physical body and the spiritual side was a serious topic. For example, you must nourish the physical body, but you must not eat so much that you fall into the sin of gluttony. Proper proportion was everything.

In fact, music (as opposed to mere noise) was all about harmony and proportion. That is why Music was studied in the medieval university only after mastering Arithmetic. A contemporary of Boethius, Cassiodorus (485-c.585 CE), compared the two by explaining that

Posted by Daily Medieval at 8:00 AM No comments: