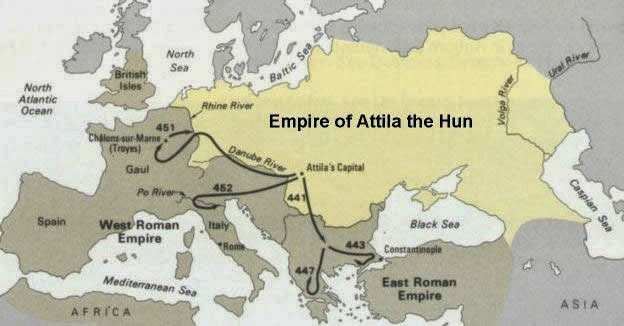 Today is the anniversary of Attila the Hun's attack on the town of Metz in Gaul.

In the 1st century CE, the Roman historian Tacitus mentioned a group of people living near the Caspian Sea. They were nomadic, and supposedly had come from the east. Tacitus called them Hunnoi. Ptolemy in 139 CE called them Chunnoi and said they were on the southern shores of the Black Sea. It is not certain if these two were the same peoples, or if they were the same as the Xiongnu people who lived north of China in the 3rd century BCE and later moved westward, as one 18th century scholar proposed.

We know, however, that there was an "empire" of Huns established in eastern Europe by the 4th century CE. They were so feared, conquering and absorbing peoples and dominating their lands, that it has been suggested that the Huns caused the great westward migration of other groups into western Europe.

Its peak of power was under a pair of brothers, Bleda and Attila. They were nephews of the leader Rugila, and took over when Rugila died in 434. The Huns at that time had been causing trouble for the Eastern Roman Empire, and they were in negotiations with Emperor Theodosius II. Several tribes that had been conquered by the Huns had taken refuge within the borders of the Roman Empire, and the Huns wanted them "back home."* Theodosius' legate agreed to push those tribes out of the Empire; the Empires of the Romans and Huns also agreed to trade with each other, and 350 pounds of gold as tribute was paid to the Huns to seal the deal (as well as gold ransoms for the Roman soldiers Huns had captured in recent fighting).

The Huns then turned their attention to invading the Persian Empire, leaving Rome alone for the next five years. They eventually turned back to attacking Europe when conquering Armenia proved difficult, falling into conflict with Rome again.

Bleda, the elder brother, ruled for 11 years. Upon his death, Attila took over. There has been speculation for centuries that Attila killed Bleda, but there is no evidence for it. The Hun Empire lost its focus after Attila's death in 453.

*Sounds a little like Putin annexing the Crimea.
Posted by Daily Medieval at 7:00 AM