The Myth of Bad Water 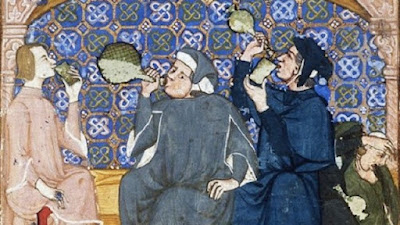 One of the things that "everyone knows" about the Middle Ages is that there was no clean water to be had, and so they drank beer and wine all the time.

Of course, many people preferred ale or wine or some other drink (like cider). One of the reasons modern people might think that the Middle Ages did not drink water is because it is rarely mentioned in literature. Instead, references to wine and ale are frequently found. But who bothers mentioning drinking water, when it is so plentiful and common. In a pre-industrial age, sources of clean fresh water were numerous: they drank it, cooked with it, washed things with it. Medical advice included when to drink water, and that cool water was better, although some doctors warned about drinking too much, too fast. One source believed that drinking water during a meal retards digestion.

Still, the clear benefits of drinking water were known. Lupus Servatus was a 9th century Benedictine monk and a prolific writer. One of his bits of advice was:


Let us make use of a healthy, natural drink which will sometimes be of benefit to both body and soul – if it is drawn not from a muddy cistern but from a clear well or the current of a transparent brook.

Servatus' line shows that they understood how to choose good drinking water. The abbot Ælfric of Eynsham stated his drink preferences: "Ale if I have any, or water, if I have no ale."

The need for fresh water was so well understood that cities made it a point to secure sources. Thirteenth-century London established a system called The Conduit that brought fresh water to the center of London. They expanded this as the city grew. Messing with water could be illegal: an 8th century Bavarian law made fouling a public source of water punishable by a fine and being made to clean it up thoroughly.

Clean water was plentiful and much appreciated in the Middle Ages.
Posted by Daily Medieval at 7:00 AM