In 635 CE, St. Aidan (c.?-651) was sent from the monastery on the island of Iona by King Oswald to re-Christianize England. He chose to found a monastery on an island off the northeast coast of England. Although it is mentioned in the 9th century Historia Brittonum (History of Britons) by the Welsh name of Medcaut (Healing), perhaps because of a reputation for medicinal herbs, it is more commonly known as Lindisfarne. Lindisfarne is a tidal island, meaning it is accessible by a causeway only when the tide is out. St. Aidan thought that this would provide security for the peaceful community of monks.

Aidan was given a horse by Oswald, so that he could ride to the nearby communities to preach. Legend says he gave the horse to a beggar and walked from village to village, speaking quietly and simply to the inhabitants, spreading the message of Christianity that had once been brought to England by Romans, but had been replaced after the fall of Rome by Anglo-Saxon paganism.

The night St. Aidan died, a teenager had a vision that inspired him to become a monk. He was made prior of Lindisfarne in 665 and bishop in 684. When he died in 687, St. Cuthbert (c.634-687) was made the patron saint of northern England. 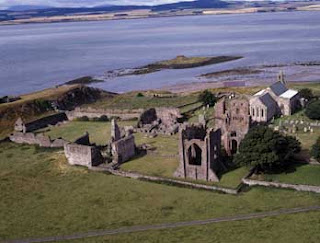 A Viking raid on northeast England in June of 793 was bad news for Lindisfarne. The Vikings had no respect for the peaceful monks, and did great damage to the Priory. Alcuin of York, a highly respected scholar in the court of Charlemagne at the time, wrote:


Never before has such terror appeared in Britain as we have now suffered from a pagan race. . . .The heathens poured out the blood of saints around the altar, and trampled on the bodies of saints in the temple of God, like dung in the streets.

More raids in 875 led to the abandonment of the island by the monks, who carried away as much as they could, including the remnants of St. Cuthbert.

Now it has a population of fewer than 200. It is largely a nature reserve and a destination for tourists who visit the ruins of the priory and a small Tudor fort turned into a castle.
Posted by Daily Medieval at 3:00 AM