In 1390, King Richard II of England had his master chefs assemble a book of all their best recipes. This Forme of Cury (Forms of Cooking) was interesting enough that an edition was presented to Queen Elizabeth I. In 1975, Lorna J. Sass took the edition printed for the Early English Text Society* recipes and not only translated the recipes into Modern English (to the best of her understanding, given the imprecision of the directions), but also tested the recipes to determine proportions of ingredients that would result in dishes acceptable to the modern palate. 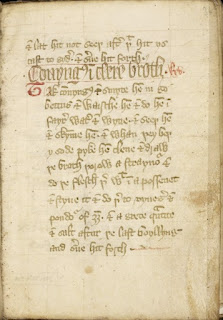 You can read it yourself one photographed manuscript page at a time here. The illustration on this page is for "Conynges (conies=rabbits) in clere broth." You can see the title clearly.

On September 23, 1387, Richard held a feast, the details of which are given. The pomp and ceremony started at 10:30, followed by:
...and that was the first course. Eleven more dishes followed—mostly meats—and then a subtlety. Then a third course of ten more dishes, and a subtlety. When this was all done, the sun was beginning to fade. Wafers and spiced wine were served, and spiced confections placed on the tables.

That was a feast!


*The EETS was founded in 1864 by F.J.Furnivall with the stated goal of putting into print all historical manuscripts available in English. It is through the EETS that many manuscripts from the Cotton Library became available to scholars and the public.
Posted by Daily Medieval at 7:00 AM