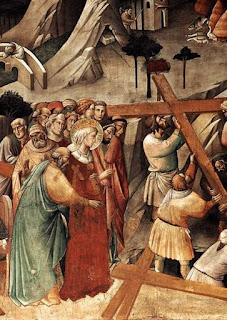 Empress Helena of Constantinople went to Palestine from 326-328CE to find Christian relics, consistent with her recent conversion to Christianity. Among other acts, she tore down a temple built by Emperor Hadrian in the 130s. Excavating under it, she found three wooden crosses.

As excited as she may have been to find three crosses, Helena wanted absolute proof of their authenticity. She tested the crosses by having a dying woman brought to the site, having her touch the crosses. Touching the first two produced no change in her condition, but touching the third cross resulted in a sudden recovery. This provided Helena the proof she wanted, and she declared the third cross the True Cross, used to crucify Jesus Christ.

On the site was built the Church of the Holy Sepulchre, a version of which exists today.

This story of the dying woman comes down to us from a monk Rufinus (344-411CE), who was a translator of Greek Christian writings into Latin. He tacks this story onto his translation of an Ecclesiastical History by Eusebius. Strictly speaking, there is no contemporary account of this. Eusebius, who died in 339CE and was therefore a contemporary of Helena, wrote a Life of Constantine (Helena's emperor son) in which he mentions the destruction of Hadrian's temple and the construction of the church on the site, but does not mention anything about the finding of the True Cross.

Nevertheless, many later records purporting to be accurate histories of the finding tell variations of the above story. Relics of the True Cross were spread all over Christendom, and even inspired a well-known Old English poem. I'll tell you about it tomorrow.