Arius was not the only early writer whose ideas were superseded by other theologians, making him a heretic. One of the next great disruptions to Christian doctrine took place several decades after Arius' death, when Pelagius (c.354-420/440) started preaching. In fact, we know little about him outside of his heresies, especially since his trials were public, and Augustine wrote about him. He was likely from Britain (Augustine and others say so, and give Brito or Britannicus as a surname); Jerome mocks him for being Scotorum pultibus proegravatus (stuffed with Scottish porridge).* From his detractors we also know that he was a large man, and spoke Latin and Greek well. 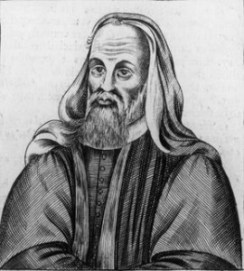 Pelagius was actually considered a saintly man and a fine theologian, and once he reached Rome he made the acquaintance of several well-known and respected men. His ideas, however, brought him into opposition with others. The chief point of difference that brought Augustine's attention was Pelagius' opinion that original sin did not, in fact, scar all human beings. Adam's sin may have been the exemplar of bad behavior, but through will power we are able to avoid sinning. To Augustine, who came to the conclusion that God's grace was necessary no matter the will of the individual, this was an idea to be squashed.

What then (for Pelagianism) was the point of Christ's sacrifice on the Cross? It was to balance Adam's example with its opposite: the perfect example of selflessness that shows us it is possible to please God. Pelagius disliked the idea of pre-destination, and felt that everyone had the ability through free will to change the path of the future for himself. This was the "through faith alone" doctrine over a thousand years before Luther and Protestantism, although he also asserted Ceterum sine operibus fidei, non legis, mortua est fides. (Without the work of faith, not of law, faith is dead.) For Pelagius, a blameless life was sufficient to enter heaven. For Augustine, a blameless life was a good thing, but not sufficient; you needed God's grace.

A trial for heresy was declared. Pelagius lost and was banished from Rome. We think he died around 420 or later in Palestine. As with Arianism, his ideas did not die with him: they were spread and refined, even producing a version called Semipelagianism which hung on for a few centuries.

*Keep in mind that, in those days, "Scot" probably meant he was from Ireland.
Posted by Daily Medieval at 7:00 AM