John Cassian (c.360-c.435) was a monk in southern Gaul, the son of wealthy parents. A well-educated young man, he visited Palestine as a youth and became acquainted with Eastern monasticism in Bethlehem. Desiring to delve more deeply into the ascetic life, he asked for a leave of absence from the monastery in Bethlehem and traveled to Egypt, where he visited Christian hermits for seven years. He was so impressed by their wisdom that he returned to Bethlehem to ask for an extended leave, and went back to Egypt for another several years. 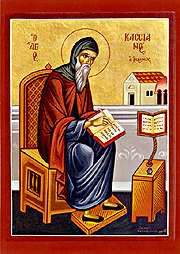 From Egypt he traveled to Constantinople and became a disciple of St. John Chrysostom, who elevated him to the position of deacon. Chrysostom had local issues that led to his exile from Constantinople in 404, whereupon Cassian was sent to Rome to appeal to Pope Innocent I on Chrysostom's behalf. At that point, Cassian drops out of the public record for the next decade. We assume he was made a Roman Catholic priest, because in 415 we find him in Marseilles having founded two monasteries, one (over the tomb of St. Victor) for men and one for women. He seems to have lived out his days in Marseilles, writing a couple of works, one of which (Called "The Institutes" for short) explained the monastic life. He is buried at St. Victor.

Gregory the Great regarded him as a saint. Pope Urban V, who had been an abbot at the monastery at St. Victor, had "Saint Cassian" engraved on the silver casket that held his head. The Greek calendar of saints lists him. The modern procedure of canonization did not exist, however, and the Roman Catholic Church—although "recognizing" a feast day of 29 February—does not consider him an official saint. The Eastern Orthodox Church gave him slightly more recognition with a feast day of 23 July.

Despite these testimonies, he is considered the origin of the heretical refinement of Pelagianism called Semipelagianism. Whereas Pelagianism taught that coming to God (salvation) was an act of free will, and the orthodoxy of Augustine taught that God's grace was needed for salvation, Semipelagianism held that the initial steps toward salvation were an act of free will, but God's grace was necessary for the increase of faith that ultimately brought one to God.

It was a nice compromise, but the Second Council of Orange in 529 declared it a heresy along with Pelagianism, and reaffirmed the theology of Augustine. The 14 bishops of the Council declared that although faith was a free act, from the very beginning it was the result of God's influence. It was approved by the pope (probably Felix IV), and that was that.
Posted by Daily Medieval at 7:00 AM