The Plan of St. Gall 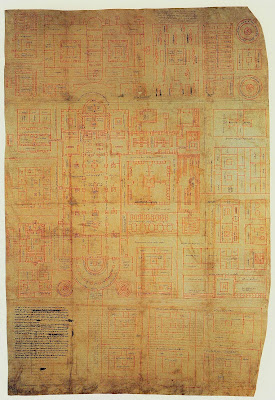 In April 2013, near Meßkirch in southern Germany, construction will start on a monastery. It is expected to take 40 years to complete, because the builders will use 9th century tools to build it. This alone should be sufficient to ensure its celebrity on the Internet and in the hearts of medievalists.

But wait ... there's more. The design of the monastery complex is from a document that is 1200 years old. The Plan of St. Gall is a 122cm x 77.5cm manuscript that was discovered in 1844 when a pamphlet containing a 12th century life of St. Martin was unfolded. It shows the layout of 40 structures and spaces for gardens and orchards and a road. It includes 333 labels that identify the buildings and their purpose.

To be clear: the Plan of St. Gall isn't the actual layout of the monastery at St. Gall; the terrain wouldn't allow it. An inscription on the Plan tells us that it was a gift to the Abbot of St. Gall, Gozbertus (fl.816-837), who was responsible for having the monastery's church built in the 830s. According to the men* who brought the Plan to modern attention, it was based on a design made at two Carolingian reform synods held in 816 and 817 in Aachen intended to formalize Benedictine culture.

For modern scholars, its value is as a focal point for study about Carolingian monastic life and 9th century architecture. The ongoing "St. Gall Project," administered by the Center for Medieval and Renaissance Studies at UCLA, is not only creating the to-scale dimensions and models of the structures, it is also re-creating digitally the libraries of the monasteries at St. Gall and Reichenau (mentioned here). Despite the idealized nature of the design, it does have a carefully laid out scale based on multiples (and halves) of the number 40. Clearly there was careful thought put into the design. By constructing the "ideal" Benedictine monastery based on the St. Gall manuscript, and re-creating the monastic complex including the written works that would have informed its inhabitants, the project hopes to gain grater insight to the culture and mindset of the early 9th century.

*Medievalist Walter Horn and architect Ernest Born produced a three-volume analysis of the document in 1979, The Plan of St. Gall (Berkeley, Calif., University of California Press).
Posted by Daily Medieval at 6:30 AM