Charlemagne put serious effort into making his reign reminiscent of the grandeur that was the Roman Empire. He gathered scholars and artists from all over Europe, including Alcuin and Joseph Scottus and Paulus Diaconus and many others. Nothing was too advanced or grand to be attempted and supported. When it came to building a palace complex worthy of his dreams, in western Germany, in the city of Aachen, he called on Odo of Metz (742-814).

All we really know of Odo is his name, mentioned in two places: by Charlemagne's contemporary biographer, and in an inscription around the dome of the Palatine Chapel he built that is the only part of the palace complex that remains. Now incorporated into the Cathedral of Aachen, it was designed after the still-standing basilica of San Vitale in Ravenna, Italy. San Vitale was built in the Byzantine style, and the Palatine Chapel in Germany has a very Byzantine feel: an octagonal shape, marble floor, striped arches and golden mosaics.

The Chapel was also an important repository for holy relics, which are still preserved in the Aachen Cathedral: 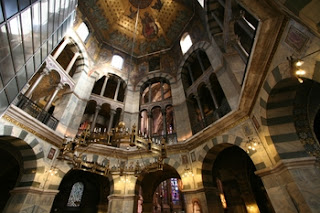 ...and the remains of Charlemagne himself.

The Chapel of Aachen became a point of controversy in the 20th century, however, for reasons no one could have foreseen during its construction. Its advanced construction—the high rounded arches, the height of the dome—are not seen again until the development of Romanesque architecture in the 11th century. Most historians attribute this to the skill of Odo of Metz. A German art historian, however, thinks it is evidence of one of the greatest conspiracy theories in the history of the world. I'll tell you about it tomorrow.

*These relics are shown every 7 years; next showing is in 2014. Make your travel plans now! (And hope the Lufthansa strike ends soon; right, Lois?)
Posted by Daily Medieval at 7:00 AM