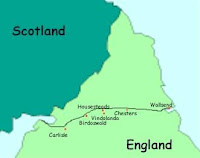 In 1796, Newcastle's town clerk bought a 17th century mansion called the Chesters Estate which included a part of Hadrian's Wall and a Roman fort. He leveled the fort to create a park-like setting for his home, showing no particular interest in preserving a piece of history. Fortunately, his young son felt differently. John Clayton (1792-1890) would follow in his father's footsteps as town clerk, but before that he would diverge from his father in showing a keen interest in preserving the past.

In the 1830s, John became concerned about Hadrian's Wall: parts were missing. Farmers and others had been dismantling sections of the 72-mile-long structure for their own building projects for centuries. Dismayed at the loss of a piece of history, he began to buy up the land on which it stood. He promoted tourism of the Wall, he conducted excavations and restoration work, and he published archaeological studies on it.


Traditionally, the Wall was begun on this date in 122. There is evidence, however, that when Emperor Hadrian visited Britain in 122 to review the borders of the Roman Empire the wall was already in progress. The descriptions and remains are impressive: its dimensions varied from 10 feet wide by 16-20 feet high to 20 feet wide and 11 feet high. (The variety is because different legions worked on different sections and had different materials at hand.)

There were "milecastles" every 1620 yards (the Roman mile) capable of housing 50-60 men, with towers every 1600 feet. Well, that was the plan: the placement of the milecastles can vary by up to 200 yards depending on terrain. Later, 14-16 larger forts were built along the Wall that could each house over 500 men. Additionally, a road was constructed on the south side to allow swift travel along the perimeter, and a system of berms and ditches made approach from the north more difficult.

Every article on the Wall says it was built to keep the Picts out, but while that may have been the purpose of the Wall, its function was more complex than as just a defensive work. At every milecastle was a gate, and historians accept that commerce would have passed from north to south on a daily basis. The "threat" posed to Roman Britain by tribes north of the Wall may have been exaggerated.

The collapse of the Roman Empire in 410 and the withdrawal of its legions from Britain might have meant the abandonment of the Wall, but there is evidence that it remained garrisoned, probably by local Britons, for another generation or two. Eventually, however, it was abandoned, and the materials started to be scavenged for other constructions.

In 1987 it was declared a World Heritage Site. A National Trail footpath follows the Wall for part of its length. Just last week, a project called "Connecting Light" illuminated the Wall with 500 balloons to create a 70-mile spectacle in honor of the London 2012 culture festival.
Posted by Daily Medieval at 7:00 AM