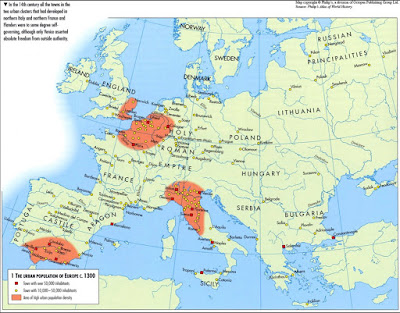 In the Middle Ages, how many people lived in how much space? An economist who writes about cotton, migration and other topics (and has written a piece on why Westeros has gone millennia without an Industrial Revolution) has compiled data on what we know about populations in medieval countries and tried to produce estimates of population density.

The first point he makes is that sustainable population in 800CE is not the same as that of 1000 or 1300. Conditions change all the time in a society that does not have control over disease or natural disaster. He cites a widespread previous figure of 30-120 people per square mile and rejects it. Taking the total area of a country and our best knowledge of that country's population, the math works out to far fewer people.

Therefore, he offers figures such as France with about 68/square mile in 1300, Italy with between 60 and 95 folk per square mile, England and Wales with 11-30, Scotland with somewhere between 4 and 8, and Sweden and Norway with 1-4. This, of course, neglects wide swaths of a country that might be uninhabitable.

Also, what about the tendency of people to cluster together for mutual benefit? Well, in the many villages that dot the land, populations of a few hundred dominate. In fact, it looks like self-sufficiency in a typical medieval village averages about 300 people. (Incidentally, this is the same figure a 2010 government study determined the average person has in the "personal network": the number of people you know well enough to say you "know" them. link) Also, a country that is 95% agrarian needs space for crops and livestock, and so population density is still fairly low.

But what about urbanization? Let's look at London.

Best estimates for London in 1000 CE are 5000-10,000; three centuries later it is ten times that number. That changes radically because of the Plague, however, and in 1350 the population has dropped by half, say 25,000-50,000. This presents enormous challenges for governance. How do legislative decisions get made and disseminated when you cannot get the whole village in one place?

We will look at that next time.
Posted by Daily Medieval at 7:30 AM