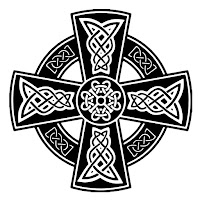 We have discussed the Synod of Whitby in 664, which debated whether Roman-based or Iona-based Christianity should prevail. "Celtic Christianity" might be a better term for what was being followed in the British isles, since it was a collection of practices that was found among the Celtic-speaking peoples of the early Middle Ages. We've discussed the Easter date controversy, but there were other differences: how monks should be tonsured, how the sacrament of penance should be performed, etc.

The typical method of tonsure to denote your status as a monk is seen in artwork, and clearly represented the crown of thorns: it shaved a circle at the top of the head and below the ears, leaving a ring. We do not have artwork from the time depicting the Irish tonsure, but it appeared to run from ear to ear over the head, rather than around.

Regarding penance, the Irish form was a private matter: the penitent Christian confessed to a priest in private and was given a form of penance to undergo privately. This does not seem strange to modern Roman Catholics, whose churches have confessionals: a small room for the penitent with a grill connecting it to a small room where the priest sits, so that the two can speak with anonymity. On the continent, early Christian penance was a public affair, with those wishing to participate appearing in sackcloth and confessing as a group.

Another practice that found expression in Britain and Ireland was the idea that one must travel away from one's home as part of the religious life. This peregrinatio pro Christo [Latin: "exile for Christ"] became popular later when St. Augustine of Hippo claimed one should be an exile in this world while awaiting the Kingdom of God.

The term "Celtic Christianity" is a convenient one, and should not be construed as evidence that there was a formal set of rules for all of the Celtic world as opposed to the Roman world. Ireland had some of its own preferences. Britain, like the rest of the world, placed religious authority with the bishop of a diocese. In Ireland in the early Middle Ages, the abbot of a monastery was considered a more significant authority than the bishop.

I'll talk about some additional divergence between the early Irish and British churches next.
Posted by Daily Medieval at 8:00 AM