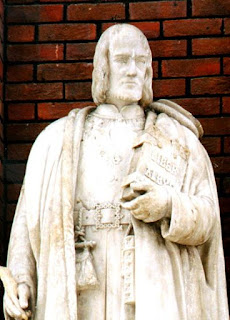 The Liber Albus or White Book was the first compilation of the laws of the City of London. It was assembled in 1419 by one John Carpenter, the Town Clerk of London, with whom it is so closely identified that a statue of Carpenter in the City of London School for Boys shows him holding the book!

The earliest firm date for Carpenter is 18 December 1378 when he was baptized in Hereford Cathedral. Later information says he was 45 in 1417, when he became Town Clerk of London, which would mean he was born about 1372. Records frequently list him as John Carpenter the younger, to distinguish him from two other men of that name who were active at that time. Oddly (to modern sensibilities), one of the other John Carpenters was his older brother, to whom he left much property when John the younger died in 1442.

The White Book was completed in 1419, the first time all of English Common Law (at least, as it pertained to the City of London) was compiled in a single document. A large part of it is given over to the regulation of the food trade and civic order. One scholar discusses how the document was put together with a specific agenda; Carpenter and the mayor who ordered the work were aiming to establish the City of London as the recipient of "ancient and sacrosanct privilege" not enjoyed by the rest of England. (This may have been partially because the King seized London's real estate in 1392, claiming that the City had been mismanaged.)

The mayor who ordered the work was Richard Whittington, one of the more prominent mayors of that century. If the name sounds vaguely familiar, you may be recalling the English folk tale Dick Whittington and His Cat. Yes, this is that Dick Whittington! And he—if you did not suspect already—deserves his own entry next.
Posted by Daily Medieval at 7:30 AM