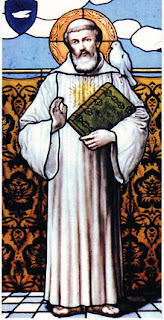 Recent posts about the differences between Irish Christianity and other practices in the early medieval church are due largely to the work of Saint Columbanus. From his birth in West Leinster, Ireland in 543 to his death on 21 November, 615 in Bobbio, Italy, he traveled widely.

A handsome man in his youth, filled with temptations of the flesh, he took advice from a religious woman who was living as a hermit. She told him:


Twelve years ago I fled from the world, and shut myself up in this cell. Hast thou forgotten Samson, David and Solomon, all led astray by the love of women? There is no safety for thee, young man, except in flight.

Over the protestations of his mother, he went to Lough Erne to Abbot Sinell, and afterward to Bangor to Abbot St. Comgall where he developed the Rule of St. Columbanus, a more strict set of rules than the widely used Rule of St. Benedict. During this time, he strongly promoted aspects and practices of christianity like private confession and strict penance, etc.

When he was 40, he had the inspiration to preach in foreign lands. Assembling 12 companions, he set sail, stopping a short time in England, then went to France about 585. Their modesty, patience, and humility stood out in a country that was suffering from a dearth of religious people after being ravaged by barbarian invasions.

Her managed to perform many miracles (so his chronicler tells us):


He passed away peacefully in his hermit's cave.

Some of his original 12 followers were interesting characters in themselves. I'll tell you about them next.
Posted by Daily Medieval at 7:03 AM