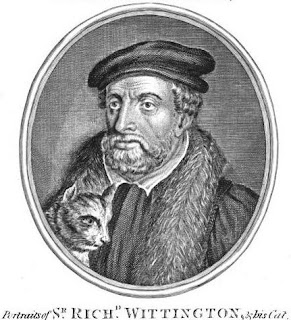 One of the most prominent mayors of the City of London in the Middle Ages (and perhaps of all other eras) was Richard Whittington. He was born sometime in the 1350s into a well-to-do family, but as a younger son would not have expected to inherit anything substantial; he was therefore sent to London to learn to be a mercer (a merchant who deals in cloth). Fortunately, he was good at the trade, and by 1388 he was selling to the royal court. He used his growing wealth to become a moneylender, rather than buy property. This ingratiated him to many prominent people; King Richard II was borrowing from him in 1397.

By that time he had been a councilman, an alderman, and a sheriff as well as a powerful member of the Mercers' Company. In 1397, Mayor Adam Bamme died. London and the King were in the middle of a serious dispute: asserting mismanagement, King Richard had appropriated London's real estate. Richard forced London to accept Whittington as mayor. Richard owed Whittington money, and could simply default on the loan. If Whittington wanted his money, he would work with Richard to resolve the dispute. Within days, they struck a deal by which London would receive back all its real estate and right to self-government in exchange for £10,000. That was in June; in October, the citizens elected Whittington mayor in his own right.

In all, he was elected mayor 4 times (though not consecutively). When Richard II was deposed in 1399, Whittington's situation did not suffer: he also had business dealings with Bolingbroke, now King Henry IV, and so he remained on good terms with the (new) King. He also loaned large sums to Henry V, and continued to be successful, as a member of parliament representing London, and even as a judge in usury trials in 1421! Henry V also appointed him supervisor of the funds for rebuilding Westminster Abbey.

He was a magnanimous figure. Money from him helped to rebuild the Guildhall (used as town hall for centuries). He financed drainage systems for parts of London, a ward for unmarried mothers at a hospital, the rebuilding of his ward's church, and "Whittington's Longhouse," a public toilet that seated 128 and was situated so that high tide in the River Thames would flush it out. His will left £7000 to rebuild Newgate Prison, repair St. Bartholomew's Hospital, install public drinking fountains, and more.

Historians know him well, but schoolchildren in England know the name for things he never did, and we will look at that next.
Posted by Daily Medieval at 7:30 AM