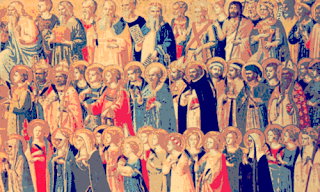 One purpose of the Daily Medieval blog is to bring to light knowledge of characters and events that do not reach the mainstream culture. Everyone has heard of King Arthur, Merlin, jousts, etc. There was so much more, so many more lives and events and customs, that made up that time we romanticize as the Middle Ages.

Columbanus, discussed in the previous post, set sail with 12 companions to preach to the world. Their names are known, and some of their stories.

Saint Attala was one. He was dissatisfied with the less-than-strict discipline at the abbey at Lérins, and joined the monastery of Luxeuil, which had just been founded by Columbanus and had a much more rigid discipline. He succeeded Columbanus as abbot of Bobbio in Italy and maintained a strict rule. Several monks rebelled against his rules and left. After some died in the outside world, the rest thought it a punishment from God and returned to his monastery. He died in either 622 or 627, depending on your source; his feast day is 10 March.

Saint Deicolus (born c.530) followed Columbanus all over western Europe. Even at 80 years old, he was determined to follow Columbanus on further travels, but age and infirmity forced him to give up the wandering life and settle in Lutre in Besançon, where he was the apostle of his district until his death in 625 at the age of 95.

Deicolus' younger brother was not quite so obscure, having appeared in this blog many times already. He is known as St. Gall, or Gallus. You can search this blog for him, but my personal favorite historical link to him is here, with the only known architectural plan (such as it is) extant from centuries of medieval buildings.

I think we will have a few things to say about medieval architecture in general in the next post.
Posted by Daily Medieval at 7:26 AM