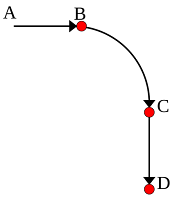 After the previous post on impetus, I wanted to introduce you to Albert of Saxony, who took Avicenna's idea a step further.

A pupil of Jean Buridan in his youth, he was influenced by Buridan's teachings on logic and physics. He worked out his own theory of impetus, based on his predecessors and adding the third or "final" stage of a moving object. Prior to this, it was accepted that
1. the initial force causes the object to move in a straight line (A-B)
2. the object deviates from its path as impetus fades (B)

To this theory, Albert added the third stage:
3. the impetus or force which causes the initial movement is spent, and gravity draws the object downward vertically (C), where it stops (D).

Modern physics would describe this progression as an example of inertia. It seems obvious to us, but these ideas and their descriptions had to start somewhere!

The careful, methodical way in which he laid out his thoughts, and his commentaries on Aristotle's Physics, made him more widely read in the Middle Ages than Buridan. The widespread distribution of his works spread the ideas of the University of Paris throughout Italy and central Europe.
Posted by Daily Medieval at 7:30 AM