The Pillar of the Boatmen 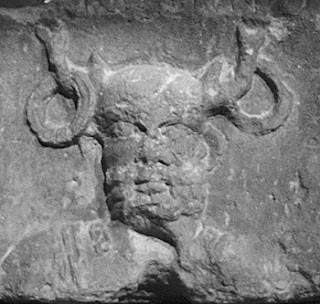 The figure shown here is called Cernunnos. He is  the "horned god" of ancient Celtic culture, representing fertility, the natural world, the underworld, and wealth. (Deities of the underworld are linked to wealth because precious things are dug up from the earth; Greek Hades was the same.) The image of the male figure with horns/antlers is found in over 50 carvings, one of which is on a stone pillar linked with the location of Notre Dame.

The Cathedral of Notre Dame of Paris was built over the site of an earlier church of St. Stephen (actually, since this was in France, "St. Etienne"). St. Etienne was built on the site of a Gallo-Roman temple. A carved stone pillar with the image to the left—and several other images—was found in 1710 while excavating a crypt under the nave of Notre Dame. The pillar had been broken into pieces, the blocks used to reinforce foundations. When reassembled, it was clear that it had been part of a much earlier pagan temple on the site.

It is now called the Pillar of the Boatmen because it was erected by a guild of Gaulish sailors, who dedicated it to Emperor Tiberius (which dates it between 14 and 37CE). The carvings show sailors and several deities.

One interesting fact about the pillar and the horned figure is that this is the only recorded use of the name Cernunnos in any early source. The name is unusual, and next we will see if we can figure out whence it comes.
Posted by Daily Medieval at 7:30 AM