London Bridge is Going Up! 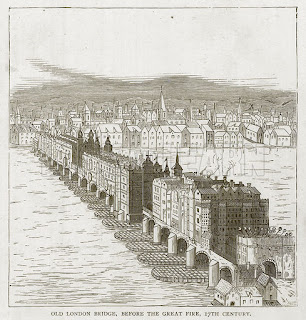 London Bridge—the first of which was built in 80 CE—has, indeed, fallen down. In fact, for the first millennium of the Common Era, the wooden structure linking Southwark to the City of London was rebuilt countless times. As the only link between the banks of the river from the sea until Kingston (15 miles upriver from London), it was important for commerce and defense.

In 1014, when Æthelred the Unready's Saxons and King Olaf's Vikings joined forces and sailed up the Thames, they aimed to split the Danish forces in London by attacking the Bridge. The Danes hurled spears down on the ships, which defended themselves with thatch taken from London cottages; then the attackers went under the Bridge and pulled down the supports with cables. To some, this is the origin of the nursery rhyme.*

That wasn't the only time "London Bridge is Falling Down" would have entered the vocabulary. For the first 70 years after the Norman Conquest in 1066, there were ten incidents in which fire destroyed or significantly damaged the bridge. Several of the rebuilding efforts included aid from different counties, proving the importance of London Bridge to those outside the city.

A stone bridge was begun in 1176. Financed by a tax and overseen by Peter de Colechurch, it took 33 years to finish.

This was an enormous undertaking. The new London Bridge was 300 yards long, with 20 arches that were 60 feet high and with 30 feet wide spaces, each with gates. The bridge supported a road 20 feet wide—wide enough to be used for houses and shops, some of which were three stories high. Upper stories would be built wider than the main floor, and joined by timbers. The Bridge became a narrow lane lined with shops, with a roof overhead. Their rents supported the upkeep. Mill wheels were set up under the arches to grind grain.

Sadly, the City's modern needs demanded that the old Bridge be demolished and a new one be built, in 1831-2. Another decade, and we might even have had photographs of the structure that stood for over six centuries.

*More on that in the future.
Posted by Daily Medieval at 7:00 AM