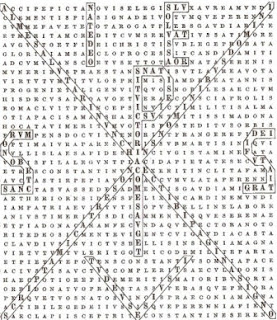 The simplest form of acrostic is a poem or other writing in which the first letter of each line spells out a word (presumably on that is related thematically to the writing). They are frequently used in education today because they are fun, but 2000 years ago they were considered valuable learning tools because of their embedded layers of meaning, especially the type of acrostic called carmina figurata ("shape poem"); it could either be a poem with words constrained to a shape such as a chalice or dragon, or it was designed so that various letters could be highlighted to make shapes or focus the reader on certain words or names.

This practice had been elevated to a high art by Roman poets. The sample on this page is from Publilius Optatianus Porphyrius, who was writing to please the Emperor Constantine in order that Optatianus might be recalled from exile. Optatianus is credited with inventing this type of carmina figurata, where the shapes to be found are internal to the poem, which is written out as a block (or other symmetrical shape) of text to aid in finding the lines. You can see not only the chi-ro symbol, but the name "iesus" spelled around the outside of the square. An interesting scholarly examination of Optatianus' figure poems can be found here.

We know almost nothing about Scottus outside of his connection with Alcuin. He was Irish, and probably studied at the monastery in Clommacnoise. It is assumed that at one point he studied under Alcuin at York, and that connection drew him to the Frankish court when Alcuin took over. Despite his background and anti-Irish sentiment at the time, he was on very friendly terms with Charlemagne, and Scottus took over for Alcuin in 790 when Alcuin had business back home.

Very little writing by Joseph has survived, most of which is acrostics. Alcuin apparently tried to revive the form, and a manuscript of acrostics exists in Switzerland that clearly came from Charlemagne's school: the majority of acrostics are by Joseph Scottus, with others by Alcuin himself and Bishop Theodulf of Orléans. (Alas, I can find no pictures of the manuscript to share!)
Posted by Daily Medieval at 3:30 AM