Beer/ale has been brewed since the days of the Roman Empire. I suppose we should say that ale has been brewed that long, and beer came later. Originally made with barley, and then later with different grains, it was only around 1500 that the practice of adding hops to the mixture became popular. Although the word beer is almost as old as ale, the Middle Ages used the different words to distinguish between the much more common ale without hops and beer, made with hops.* 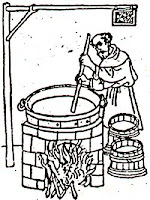 Mashing up grain, letting it sit in water with yeast, then letting it ferment was easy to do and produced a drink that provided calories, hydration, and not a debilitating amount of alcohol. Spices were sometimes added for variety. At a time when water was not always potable or easy to come by, turning it into a tastier drink was a desirable goal, easily accomplished by many households. And brewing would have been an ongoing process: hops provide preservative qualities that ale would lack. Given, however, that ale was drunk on a daily basis by almost everyone, frequent brewing would have been planned, and the more the better, because selling excess was a great way to make some extra cash.

Because ale (and later beer) was such an essential commodity, regulations for controlling prices, amount, and quality abound. Records of fees levied reveal the large number of women involved in the process. In fact, it is fair to say that brewing was a woman-dominated career in the Middle Ages at least until the Black Death, and for most of the rest of that century. Every village and hamlet probably had women who provided most of the ale to those who did not brew their own.

The introduction of hops changed the industry as well as the drink. Hopped beer could last longer, and it was therefore efficient to brew it in mass quantities. The equipment needed for this required a larger outlay of capital, which the cottage-industry alewife could not afford. Also, brewing in large quantities was more labor intensive and could not easily be squeezed into the day by the woman who had other domestic chores to attend to. The brewing of hopped beer became a town-centered industry dominated by men; where women were involved in the new model, it was as distributors.

If this post has whetted your appetite for historical ale and beer knowledge, consider this or this.

*Search the Internet for when hops started being used and you will find a wide variety of answers. Trivia: The Middle Ages Brewing Company (in Syracuse, NY) website says "Come and see ... British style 'real ale' brewery." Do you suppose they really leave out the hops?
Posted by Daily Medieval at 3:00 AM