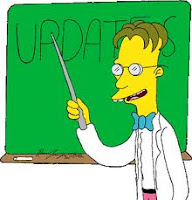 My research (or just day-to-day life) sometimes bring me details that I wish I'd known when I wrote a certain blog post, or that I think are interesting tidbits that tie into posts. Occasionally, I will throw these updates together with links to the originals.

May 19
The Domus Conversorum, the "House of Converts" in London for Jews who converted to Christianity (or else be banished from England). A picture of what is on the modern site is here. (The photographer's caption is a little misleading.)
Also, there was a building called "Domus Conversorum" in Oxford, and for awhile it was thought that Oxford (which had a large Jewish population pre-Expulsion) had its own Converts' Inn. It is accepted now, however, that the property was called thus because the rents from it went to supporting the Domus in London.

July 2, 3, and 5
John Wycliffe was a fascinating character for many reasons, but I may have been remiss in "finishing him off" by not giving you the whole story (one of this blog's followers commented on this on Facebook).
Wycliffe died 31 December, 1384, after suffering a stroke a few days earlier while saying Mass. It wasn't until 4 May 1415 that the Council of Constance declared him a heretic (prior to this, only some of his writings were proscribed). His books were to be gathered and destroyed. The Church—never one to do things by halves when defending the faith was involved—exhumed his body in 1428, burned it, and scattered the ashes in the nearby River Swift near Lutterworth.

July 21
Update on the Greenland/Medieval Warm Period topic
Just this week it was reported that satellites have seen a sudden and massive melting of the ice on Greenland. The specific/immediate cause is unknown. This may make archaeological digs for Erik the Red's settlements easier to examine. The report is here.

(Also, I want to say "hi" to any visitors from reddit.com. Yesterday saw a large influx of visitors from that site to yesterday's post on vocabulary first found in Chaucer's writings. Thanks for visiting anc creating a pleasant spike in my site traffic!)
Posted by Daily Medieval at 3:00 AM