In the history of medieval Christianity, there are stories of entire countries converting all at once. The tale of St. Rémy (c.437-533) is one.

Rémy, also known as Remigius, was born to a very prominent Gallo-Roman family in Laon. He studied literature at Reims. His reputation for piety and learning was so great that at the age of 22 he was appointed Archbishop of Reims. Clovis I, King of the Franks (reigned 481-511), had a Christian wife, the Burgundian Clotilde. Clovis was friendly and generous to the church in Reims. Rémy decided to make it his life's work to Christianize the Frankish kingdom.

One legend in particular attests to the good relations between the king and the archbishop. When Clovis conquered Soissons under Syagrius in 486, his soldiers plundered the church there. St. Rémy asked Clovis to return, if nothing else, at least the very special Vase of Soissons, one of the greatest pieces owned by the church of Soissons. Clovis agreed, claiming the Vase as his own part of the booty, but the soldier who had taken it was angry at having to give it up and broke it irreparably. Clovis returned the pieces to the church; a year later, he had that soldier killed with his own axe, telling him "Just as you did to the vase at Soissons!"

According to chronicler Gregory of Tours (writing a century later), Clovis agreed to convert to Christianity after his 496 victory at Tolbiac: he had prayed to his wife's God after seeing so many of his men being killed against the Alemanni tribes. We are told that the Alemanni began to flee at the completion of Clovis' prayer. Clovis agreed to be baptized; it was performed by St. Rémy, along with the baptisms of 3000 Franks.

More specifically, Clovis was baptized into Roman Catholic Christianity, which helped to make a distinction between him and the other German tribes establishing themselves in Europe. Groups like the Visigoths and Vandals were Christians, but had embraced Arianism, which by this time was deemed heretical. The choice of Clovis brought him into the favor of Rome and aligned him with the more mainstream version of Christianity. This was a major event in the life of St. Rémy, who is now considered the patron saint of France. St. Rémy also supposedly converted an Arian bishop to Roman views at a synod Rémy held in 517. 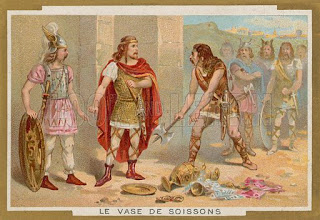 Of his writings, all are lost except for a few letters, two of which are to Clovis. A legend that attached itself to St. Rémy is the Baptism of the Moribund Pagan. When a dying pagan asked for baptism, Rémy discovered that he did not have the chrism—the sacred oils—needed to perform the ceremony. He placed two empty vials on the altar and prayed, whereupon they were filled with the two oils needed. When his crypt was opened during the reign of Charles the Bald (823-877), they found two vials containing very aromatic oils. Scholars have hemmed and hawed over these. Were they actually the two vials of the legend? Were they two vials placed symbolically in the coffin because of the legend? Or were they two vials of perfumes placed in the coffin to cover the odor of putrefaction?*

To the Archbishop of Reims at the time, Hincmar, it was clear: these vials confirmed the Legend of the Baptism of the Moribund Pagan. Clearly, the oil was that very same used for Baptism, and since Rémy also baptized King Clovis, it was clear (to Hincmar) that Reims ought to be recognized as the appropriate church for the future anointing of the Kings of France. Any relics associated with him (the locations of the two vials are no longer known for certain) now reside in the Abbey of Saint-Rémy in Reims.

*This particular theory also points out that the method of making perfumed oils was known to the Romans, but lost to Europe by the time of the Carolingians. In the 800s, they would have seemed miraculous, since the art of making perfume was unknown.
Posted by Daily Medieval at 6:30 AM