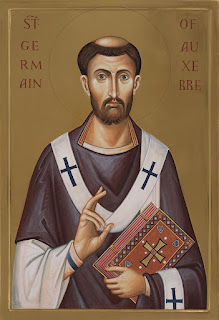 There are some stories about Germanus (c.378 - c.445 CE) that are difficult to believe and hard to substantiate. The Vita Germani ("Life of Germanus") written c.480 CE by Constantius of Lyon, no doubt intended to inflate Germanus' reputation, gives us most of our information on him.

We are told, for instance, that he was from one of the noblest families of Gaul, receiving the best education in eloquence and civil law in Rome, where he practiced law before the Tribune. He married s noble lady, Eustachia, before being sent back to Gaul as one of six dukes.

Unfortunately, he made an enemy of the local bishop, Saint Amator. Germanus would hang the carcasses of his hunting expeditions on a certain large tree with many branches to age. This tree had been used as a site of pagan rituals. Amator was angered that Germanus was drawing attention to it, so while the duke was away, he had the tree cut down and burned, along with the carcasses. Amator feared the duke's reaction, fled to the prefect Julius, and requested permission to tonsure Germanus.

When Germanus came to the church to find Amator, Amator gave him the tonsure against his will, telling Germanus that he needed to amend his ways to be prepared to replace Amator when the bishop died, and ordained him a deacon. Surprisingly (for real life; not surprisingly for a saint's story), when Amator died, Germanus was unanimously chosen to replace him as bishop. Germanus was made bishop on 7 July 418.

"Spontaneous religiosity" was a theme in anecdotes about Germanus. When he was sent from Rome to go to Britain to fight Pelagianism, he passed through Nanterre in Gaul. Walking through a crowd, he spotted a young girl and told her she should devote her life to Christ, and she did.

Germanus—who, remember, was a duke and soldier before he became a bishop—also helped the Britons against Pictish and Saxon raiders. Leading his army into a vale in North Wales, he told them to shout at his signal. Once the raiders approached, he shouted "Alleluia!" three times. The Christian army repeated his call, and the sound echoed so much between the mountains that the raiders fled, thinking themselves vastly outnumbered.

There are more stories, including one that tangentially connects him with the Arthurian legends. I'll share those next. (And eventually I'll get back to that little girl in Nanterre; we're not done with her.)