The Annals of Ulster 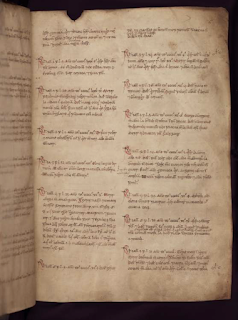 History is written by the victors, or so it is said, and I was warned in graduate school always to question an author's intent. Everyone who write something down has an agenda, a point they intend to get across. That point might not be completely objective.

The Annals of Ulster might be in the same category, but their entries are usually simple lists of events without editorializing. This give the historian a separate check on other more detailed accounts, just in case the longer account is presenting a skewed version to get across the author's political point.

Another benefit of the Annals is that they cover more than ten centuries, from 431 CE until 1540, and so reach back further than many historical records. The first entry for 431 is:

Kalends of January
The year 431 from the Incarnation of the Lord.

Palladius, having been consecrated by Celestine, bishop of the city of Rome, is sent to Ireland in the consulship of Aetius and Valerius as first bishop to the Irish so that they might believe in Christ—in the eighth year of Theodosius.

The first several decades are compiled from other accounts, before the contemporary writers take over.  For the next year, for instance, we see:

Patrick arrived in Ireland in the ninth year of the reign of Theodosius the Less and in the first year of the episcopate of Xistus, 42nd bishop of the Roman Church. So Bede, Maxcellinus and Isidore compute in their chronicles.

The contributors to the Annals seemed to like following kings and their events and battles, as well as the activity of the viking invaders of Ireland. Another benefit to historians is that the Annals are written mostly in the Irish language, with only a few entries in Latin. Linguists have used the Annals to study the evolution of the Irish language.

But here's a question: if you're writing a history of Ireland, and obviously St. Patrick is an important part of that, it might make sense to use that as your starting point. They started, however, with Palladius. So ... who was he?