The Dove of St. Nivard 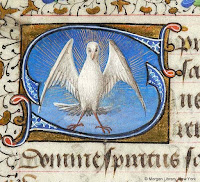 St. Nivard was one of those early medieval saints of whom we know next to nothing. He was archbishop of Reims from before 657 CE until 673. He was the brother-in-law of Childeric II (King of Austrasia). The best info Catholic.org has to offer is the his feast day, 1 September

Charles Forbes, the Count de Montalembert, a member of the French Royal Academy, published in 1861 The Monks of the West, from St. Benedict to St. Bernard. In a chapter called "The Monks under the First Merovingians" he writes:

In the following century, St. Nivard, Archbishop of Reims, visiting his diocese on foot, arrived in the fine country which overlooks the course of the Marne, opposite Epernay; and, finding himself fatigued, slept under the shed of a great beech, on the knees of his companion, Berchaire. During his sleep he saw a dove descend from heaven upon the tree, and, after marking the same circuit three times by flying round it, reascend to the skies. Berchaire, who had not slept, saw the same saw the same vision. They agreed to build an abbey there, which was called Hautvillers. Berchaire was its first abbot; and the high altar rose upon the same spot where the tree had stood when the dove alighted, a sweet symbol of the tranquil innocence which was to reign there.

From there he discusses the many legends of holy men encountered tearing animals and taming them.

Where Forbes found the original story is still a mystery to me, but at least one faithful reader of this blog "need[ed] a few more details about this dove." I had been less than thorough in my origin story of Hautvillers, so I hope this helps.

Next time, I'll talk about who these "First Merovingians" of the chapter title were.