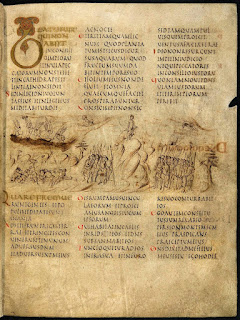 Vellum—fine parchment made from the skin of a calf—is more durable than paper. Even so, manuscripts that survived for centuries are precious, and sometimes we have them only due to extraordinary measures taken by individuals.

One such individual was Sir Robert Cotton, whose hobby was collecting old manuscripts of all kinds in his personal library. Despite a fire that destroyed some, there are countless things we know about the Middle Ages that we would not know except for his collection, including poems such as Beowulf. One unique manuscript that he collected was the Utrecht Psalter. (I should say "near-unique" for reasons explained a little later.)

A psalter is the Book of Psalms from the Bible. The word psalter is Old English (p)saltere from Latin psalterium from Greek psaltērion and means a stringed instrument. (Remember that the Psalms are songs.) This particular psalter came to the Cotton Library from Canterbury Cathedral some time after the Dissolution of the Monasteries (in the 1530s when Henry VII changed things). Robert had the pages bound, and then lent the manuscript to the Earl of Arundel, who took it into exile in the Netherlands (during the English Civil War in the 1640s); upon his death it was sold, and somehow wound up in the library of Utrecht University by 1716.

One of its distinguishing features is the style of art. Each vellum page contains a psalm, and the background of each page illustrates every image from each line of the psalm in understated color called bistro, a shade of brown or grayish brown. The pages are 10x13 inches—an unusually large size choice, unless it were intended to be used by several people reading/singing at once. It might have been a monks choir book rather than intended for personal instruction, as the mnemonic device of the illustrations would suggest.

Created in the 800s during the Carolingian period, it influenced a style that is called the "Utrecht style." There are at least three copies that were made of it prior to its acquisition by Cotton: the Harley Psalter (in the British Library), the Edwin Psalter (at Trinity College, Cambridge), and the full-color-with-gold-backgrounds Anglo-Catalan Psalter (so-called because it was half-illustrated by an English artist in 1180-1200 and finished in Catalan in 1340-50 in a different style), in the Bibliothèque nationale de France.

But whence came the original? An argument is made for it originating near Reims, because the style is similar to the Ebbo Gospels, suggesting that, like them, the psalter was sponsored by Archbishop Ebbo of Reims. Also, some believe the illustrations draw from details that would have been gleaned from the travels of none other than or recent predestination heretic, Gottschalk of Orbais. Besides psalms, it includes the Athanasian Creed, to which Ebbo's successor Archbishop Hincmar of Reims was partial.

This puts it in the vicinity of Hautvillers, which gives me a reason to re-visit Hautvillers and clear up a few details about which I was terribly neglectful yesterday. Tomorrow I answer the question: what about that dove?