I believe and confess that omnipotent and unchangeable God foreknew and predestined saint angels and elect men to eternal life gratis and that He equally predestined devil, head of all demons, with all of his apostates, and also reprobate men, namely his members, on account of their own most certainly foreknown evil merits, through the most right judgment to deserved eternal death; for thus says the Lord himself in His Gospel: “The prince of this world is already judged” 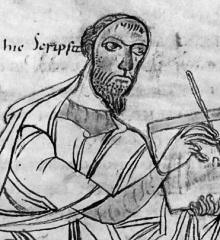 So wrote Gottschalk of Orbais (c.808 - 30 October 868 CE). He studied at Fulda Monastery in Germany where he became friends with Strabo and studied under Hrabanus Maurus. His first act of "rebellion" was being ordained in France (where he joined the Abbey at Corbie) not by his bishop, but by the local choriepiscopus of Rheims, a lesser functionary in the bishop's. By 840 he had left France for Italy where he preached his views on predestination, before being driven out by Hrabanus Maurus who at that time had become Archbishop of Mainz.

He preached and gained followers in Germany until the Synod of Mainz in 848. It was presided over by Hrabanus Maurus with King Louis the German present. Gottschalk was declared heretical, beaten, and for hidden to return to the Kingdom of Francia under Louis the German. He was sent to Archbishop Hincmar of Rheims to be kept under confinement, but he continued to preach his double predestination.

Six months after the Synod of Mainz was the Council of Quierzy—with Archbishop Hincmar and King Charles the Bald—at which Gottschalk's preachings were questioned again; this time, however, there was no calm theological debate. When Gottschalk refused to accept that is interpretation of Augustine was wrong, he turned to verbal abuse of his opponents. He was defrocked (both in the sacerdotal and sartorial sense), beaten, and imprisoned in a monastery at Hautvillers for the next 20 years, until his death.

Hautvillers; now there's a place worth talking about. Next time.