We saw here how Charlemagne captured his ex-father-in-law, King Desiderius of the Lombards, and imprisoned him in the Benedictine Abbey of Corbie. Sticking your political enemies away in a monastery was an efficient and humane way to eliminate them from the scene. Monasteries were often remote; the monastic life was carefully regulated, and so someone trying to leave would be discovered quickly; it was not as harsh as a dungeon; your enemies were given plenty of time to contemplate their sin of being your enemy. 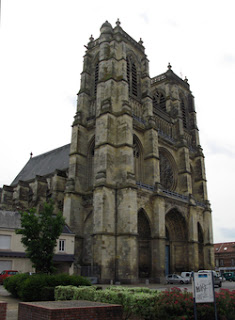 In the turmoil that followed the dividing up of the kingdom by Charlemagne's son, Louis the Pious, Louis' grandson Charles failed in his attempt to gain some power and was imprisoned at Corbie. He escaped, however, and was made Archbishop of Mainz by Louis the German, showing that imprisonment in a monastery did not mean you were a convict with complete loss of rights or privileges in the eyes of the world.

Corbie, in Picardy, was particularly favored by Charlemagne because his family had close ties to it. Shortly after Desiderius was sent there, Charlemagne's cousin Saint Adalard became its abbot. Corbie was a desirable position, because it was granted freedom from the jurisdiction of local bishops.

One of Corbie's most prominent features—not surprising given its Carolingian patronage, was an extensive library. This library not only had numerous writings by the early Church Fathers, but also many classical texts and non-religious texts. The geometry of Euclid, as transmitted to the Middle Ages by the works of Boethius, was of great interest to scholars at Corbie. A 9th century monk at Corbie, Headboard, wrote extracts from Cicero, microbus, and Martianus Capella.

This love of scholarship extended for centuries: a 17th century monk of Corbie, Jean Mabillon, is considered the father of paleography, no doubt after studying the centuries of developing styles of scripts. The distinctive script called Carolingian minuscule was developed at Corbie about the time that Saint Adalard was abbot.

This remarkable center of learning did not survive until modern times, alas. In the 17th century, 400 manuscripts were sent to a monastery in Paris and later sold to a Russian diplomat. During the French Revolution the remaining 300 manuscripts at Corbie were sent to Amiens. About 200 manuscripts from Corbie are known to exist today. The monastery itself was damaged extensively during World War I, but has been rebuilt.
Posted by Daily Medieval at 7:05 AM