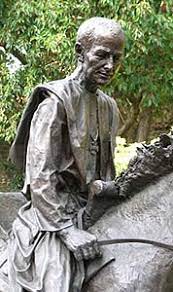 If you search online for "Sigeric of Canterbury" the top entries returned are about his itinerary, as mentioned previously. He did more than travel to Rome, however.

He was educated at Glastonbury Abbey and was a monk there for awhile. Sometime after 975 he was made Abbot of the Benedictine St. Augustine's in Canterbury. In 985-6 he was made Bishop of Ramsbury. This title seemed to be granted to men who were being prepared eventually to be Archbishop, and that's what happened to Sigeric. He was made Archbishop of Canterbury from 990 to 994, which was the impetus for the well-known trip to Rome. He had to receive his pallium from the pope, the official piece of garb that denotes the archbishop status.

Why was he "groomed" for the highest clerical office in England? We don't have details about his career, but he is sometimes referred to in contemporary document as "Sigeric the Serious." This suggests that he was respected for his demeanor. On the other hand, since we do not have any contemporary details about his demeanor, some have suggested that the "serious" epithet was a misnomer based on translation of the Anglo-Saxon "Sigeric" into the Latin "Serio" which looks like "serious." Hard to say.

He was considered a scholar and expert on religion. Ælfric of Eynsham, who succeeded Sigeric as Archbishop of Canterbury, dedicated a book of homilies to Sigeric, and asked Sigeric to correct any errors of doctrine he might find. Ælfric was quoted here in 2015 about his drinking preferences.

You have probably heard of Danegeld, the money paid to invading Danish king Sweyn Forkbeard by Æthelred the Unready. It was apparently the advice of Sigeric that Æthelred pay it. You can read a little more on why that may have not been a good idea if you check out this post from 2014. Sigeric himself paid money to the Danes to save Canterbury Cathedral from being burned.

Sigeric died 28 October 994, leaving a collection of books to Canterbury and wall hangings to Glastonbury Abbey.

The pallium mentioned here has a lot of history to it. I'll tell you about it next time.