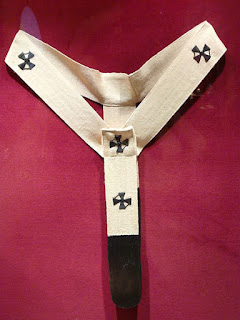 Tertullian in 220 CE wrote De Pallio ("Concerning the Pallium"), in which he talks about clothing fashion in different countries. The pallium here is not specifically religious. Pope Marcus in 336 conferred it on Bishop of Ostia, and Pope Symmachus did the same in 513 for Cæsarius of Arles. It was Boniface who insisted that it be conferred on metropolitan archbishops (archbishops who oversee a metropolis; some have the title but not their own archbishopric). The Archbishops of Canterbury were invested with the pallium, which is why Sigeric made that journey to Rome using the itinerary that has been preserved. Some popes did start charging for the pallium , enriching the coffers of the Vatican. The Council of Basel in 1432 condemned it, and the practice eventually ended.

But what is it, specifically regarding the papal garment? From the Latin palla, "woolen cloak," it is currently a band of wool that wraps around a certain way for ceremonial occasions. It used to be longer, hanging lower, but has shortened over time. Mosaics at Ravenna and Rome show the pallium looking as it did centuries ago. In current practice, a pallium is blessed by Pope Francis on the feast of Saints Peter and Paul, but it will not be conferred then on a metropolitan archbishop: he shall receive it from the papal nuncio in his home diocese.

You may imagine that pallia are not bought at your corner ecclesiastical garment shop. It is made from the lambs who are presented by nuns of the convent of St. Agnes (a minor basilican in Rome). The wool is woven into the pallia by nuns of Santa Cecilia in Trastevere.

The significance of a garment of lambs wool draped over the shoulders of the pope may have originated with the pastoral image of a shepherd carrying a lamb draped over his shoulders. The popes are shepherds of their flock, etc.

Cæsarius of Arles was a pretty interesting character. He considered women the "gems of the Church." Unfortunately, like precious gems, he felt they should be locked away for safekeeping. I'll explain more in the next post.