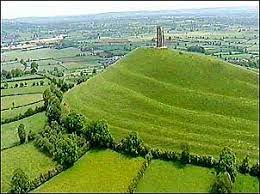 One of the oldest roadways in Northern Europe is the Sweet Track, of crossed wooden poles driven into waterlogged ground to support oak planks. Discovered in 1970, it was dated by dendrochronology to determine its age. The planks were cut in 3807-8BCE, and provide evidence that the Glastonbury area was inhabited in Neolithic times by an organized community that wanted to ensure safe and easy passes of an extremely marshy area (for thousands of years earlier it was systematically shifting from dryish land to shallow lakes.

So far as we know, however, it didn't have a name until the Saxons in the 7th and 8th centuries called it in Anglo-Saxon Glæstyngabyrig. The "byrig" element is fairly straightforward, referring to a burh or fortified place. The first part is unclear, and might have been a personal name. It might be linked to a legend from the Life of St. Patrick: Patrick resurrected a swineherd named Glas mac Caise (Gaelic glas means "green/grey-green"), who then went to (what is now) Glastonbury. There are other theories as well, none definitive.

Glastonbury is overlooked by a hill, Glastonbury Tor, on the summit of which is the remains of the church St. Michael. (Seen above, and one of the few places I have blogged about that I have actually visited.) The Tor was considered a gathering place for fairies; St. Michael was the Christian main defense against evil entities, so the chapel (later the church) was built to guard against the supernatural.

I have previously mentioned William of Malmesbury's reference to Glastonbury, and the remains of an early glass factory there. Robert de Boron added significance to the area when he had the Holy Grail brought there.

Mystical legends, such as the Glastonbury Thorn tree which sprang from Jospeh of Arimathea's staff (even though the origin of that story is de Boron who does not have Joseph actually making it to Glastonbury), and the purported zodiac built into the landscape around the town (for which there is no convincing evidence) have made Glastonbury seem very mystical. The New Age movement of the 20th century embraced Glastonbury—as seen by the number of esoteric book and gift shops—and each summer sees an enormous Glastonbury Festival of the Performing Arts. Its identification as Avalon in the Arthurian legends was also a big inspiration for its current reputation.

The existence of the Sweet Track (it was named after the discoverer, Ray Sweet) got me thinking: what about the history of roads? Stay tuned.