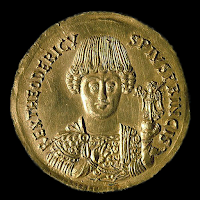 To be fair, I have mentioned one Ostrogoth before: King Theodoric was talked about here and here. The larger culture of the Goths has been mentioned many times in this blog, but this particular group has been wanting attention. The "Ostrogoths" part of the name comes from Germanic auster meaning "eastern." Before descending on Italy, these "Eastern Goths" built an empire in the 3rd century stretching east to what is now Belarus and Ukraine; "many Ostrogothic graves have been excavated south and southeast of Kiev" [Britannica] It is believed that the difference between Ostrogoths and Visigoths is based on geography, with "Visi-" being tacked on by the Roman scholar/statesman Cassiodorus (mentioned in the first Theodoric link above).

Little is known of the Ostrogoths and Visigoths except through records from the cultures with whom they came in contact, mostly Roman. They left us no literature of their own, although we know they had their own spoken language: a Goth Christian Bishop named Wulfila (or a team working under him) designed a Goth alphabet based on Greek and used it to translate the Bible; I showed their alphabet here. A few additional Goth religious fragments exist. Other Gothic documents such as statements from Theodoric are in Latin.

Isidore of Seville wrote a history of the Goths, in which he tells us that, when they asked the Roman Emperor Valens to send them teachers to instruct them in the Christian faith, Valens (because he had strayed from the truth) sent them heretical priests who instructed them in the Arian heresy. Salvian of Marseilles, a 5th century writer in Gaul concerned with the decline of the Roman Empire, writes in his De gubernatione Dei ("On the government of God") about the vices of the Romans versus the virtues of the "barbarian" Goths. The Arian Goths are praised for the chastity, tolerance toward Catholics.

Sometimes a charismatic ruler is necessary to hold a nation together. When Attila the Hun died and his empire began to fall apart, the Ostrogoths grew in strength, especially under Theodoric, and expanded, eventually into Italy. But after Theodoric died in 526, the Ostrogoth control of Italy started to disintegrate, and the Emperor Justinian in the Eastern Empire saw his chance. He declared war on the Ostrogoths in 535. In the following two decades, much of Italy was damaged in the battles between the two armies. What is certain is that, after 554CE, no more Gothic texts are produced in Italy; the Ostrogoths seem to have lost their national identity.