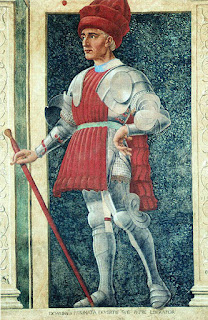 John Hawkwood (c.1323 - 1394) was an English soldier who became famous as a mercenary leader. Many Italian city-states hired foreign mercenaries to lead their armies, so that the soldiers had no loyalties to any families inside the city that could lure them to support a military takeover.

We know for certain of his leadership of a group in France because of a letter addressed to him as the leader from Pope Innocent VI, asking Hawkwood's group to stop harrassing the fort at Pont-Saint-Esprit. They refused the pope's request, which led to their excommunication. The issue was resolved when the pope offered more money to fight for him in Spain and Italy. This split the group, and Hawkwood led the half that went to Italy. Italians had difficulty pronouncing his name, and he became known as Giovanni Acuto, "John the Sharp/Astute."

He was eventually allied with Bernabò Visconti against Pope Urban V. Although outnumbered, Hawkwood managed to outflank the enemy and capture many officers, cementing his reputation. He later went on raids through the countryside, intimidating various towns to pay him to leave them alone. One of these raids led to the War of the Eight Saints.

He outmaneuvered enemies with feigned retreats and ambushes, setting up banners in one area as if he were camped there, and then coming around at the enemy from a different direction. He was known for brutality as much as cunning: he had no problem with his men raping, dismembering, or outright murdering peasants. He sacked monasteries such as the Abbey of San Galgano.

I mentioned his marriage to Donnina Visconti yesterday; he also had an earlier English wife with whom he had at least one daughter, Antiochia, who married into the Coggeshall family of Essex. He had several children with Donnina, and at least two sons from other affairs.

After his death, on 17 March, 1394, an elaborate funeral honored him in the Duomo in his then home town of Florence; a painting of Hawkwood contracted by the Medici family in 1436 commemorates him. Donnina traveled to England to lay claim to his family lands, but the records of ownership had disappeared during the Black Death. His wealth seemed to vanish overnight.

Next I want to tell you more about the Abbey of San Galgano and the sword in the stone.