The Council of Orange 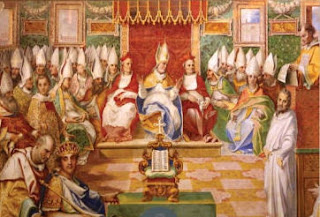 There were two Councils of Orange. The first was held 8 November 441, presided over by Hilary of Arles.  He and 17 bishops established rules for the right of asylum, penance, administering sacred rights to those who were "defective" in body or mind, and a few others.

The second Council of Orange, in 529, presided over by Cæsarius of Arles, dealt with heresy and affirmed much of Augustine of Hippo's ideas.

As it turns out, I've already mentioned one of the chief concerns of the Council of Orange in 529, when I wrote about John Cassian (the "sometime saint"). Cassian's "SemiPelagianism" (a "compromise" between the "heresy" of Pelagius and the "orthodoxy" of Augustine of Hippo) claimed that God's grace was not needed to start someone's path to the good. Augustine maintained that God's grace must be present from the beginning.

The third canon of the Council says:

If anyone says that the grace of God can be conferred as a result of human prayer, but that it is not grace itself which makes us pray to God, he contradicts the prophet Isaiah, or the Apostle who says the same thing, "I have been found by those who did not seek me; I have shown myself to those who did not ask for me."

The quotation is from Romans 10:20, in which Paul quotes Isaiah 65:1. This suggests that absolutely anyone (and therefore everyone) could find God's grace, because the potential for God's grace is present in everyone whether they know it or not.

If anyone says that not only the increase of faith but also its beginning and the very desire for faith, by which we believe in Him who justifies the ungodly and comes to the regeneration of holy baptism-if anyone says that this belongs to us by nature and not by a gift of grace, that is, by the inspiration of the Holy Spirit amending our will and turning it from unbelief to faith and from godlessness to godliness, it is proof that he is opposed to the teaching of the Apostles,

I'm not a theologian, but this reminds me of the document Lumen Gentium ("Light of Peoples") from Vatican II, in which the "possibility of salvation outside the Church" is discussed.

Nor is God far distant from those who in shadows and images seek the unknown God, for it is He who gives to all men life and breath and all things, and as Saviour wills that all men be saved. Those also can attain to salvation who through no fault of their own do not know the Gospel of Christ or His Church, yet sincerely seek God and moved by grace strive by their deeds to do His will as it is known to them through the dictates of conscience. Nor does Divine Providence deny the helps necessary for salvation to those who, without blame on their part, have not yet arrived at an explicit knowledge of God and with His grace strive to live a good life.

This was a healthy attitude that denied no one the opportunity to be a child of God and receive salvation.

There was one item from Augustine of Hippo's writing that the Council did not ratify, and that was his stand on predestination. Next time.