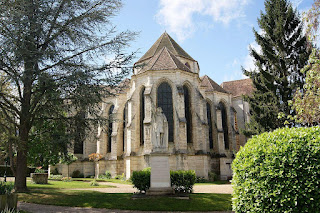 Hautvillers is a commune in northeastern France. In 650 the Benedictine Abbey of St. Peter (in French it was the Abbaye Saint-Pierre d'Hautvillers) was established; it remained active until the French Revolution in 1789.

It was founded by St. Nivard, the Bishop of Reims, when a dove indicated where it was to be established. The abbey was devoted to the Rule of St. Benedict and of St. Columbanus, whose monastery practices in Ireland were in some cases even more strict than Benedict's.

The Abbey was known for its illuminated manuscripts. The very vibrantly illustrated Ebbo Gospels came from this Abbey. A well-known book of psalms known as the Utrecht Psalter (discovered in the Netherlands in the Utrecht University Library in 1858) is illustrated in a similar style to the Ebbo Gospels, and so might have come from here as well.

In 841, a priest from Reims stole from Rome the bodily relics of St. Helena, mother of the Emperor Constantine and finder of the True Cross. Pilgrimages to see the relics helped bring donations to the Abbey, allowing it to purchase more property. (After the French Revolution, the relics were transported to Paris; they went to the Knights of the Holy Sepulchre in 1819.)

One of the uses of more land was, of course, to provide the Abbey with its own food and drink. Vineyards were always a good idea. One of the monks at Hautviller disliked using white grapes, because of their tendency to enter "refermentation." Refermentation happened after the wine was bottled: in the warmer weather, remaining yeast would "wake up" and start producing carbon dioxide again. Enough and you have sparkling wine; too much and you have exploding bottles. This monk laid down some rules for the best wines and best sparkling wines, such as blends of grapes from multiple vineyards (before pressing, not after they were already wine). His name was Dom Perignon. He did not develop the brand now known as "Dom Perignon," but it was named for him. The myth that Perignon invented champagne was created by a later monk, Dom Groussard, who made up many stories about the Abbey to garner fame.

Next: whether it came from Hautvillers or not, the Utrecht Psalter is worth a look.