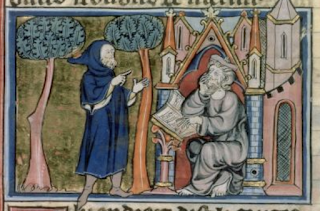 Robert de Boron was a French poet of the late 12th/early 13th centuries. There are two texts in Old French that are definitively attributed to him: Joseph d’Arimathie and Merlin. Two other texts are attributed to him with uncertainty, although similar in style: Perceval and Mort Artu ("Perceval" and "Death of Arthur"). Together they are called the Robert Cycle, or The Romance of the History of the Grail.

In Joseph d’Arimathie, de Boron merged the legend of the grail with Christian concepts. The magical grail first appeared in Chrétien de Troyes' Perceval, le Conte du Graal in about 1190, but it was not a Christian item. de Boron explained it as the cup used at the Last Supper, and then used by Joseph of Arimathea to catch Christ's blood at the Crucifixion. Later, Joseph creates a company that brings the grail to Britain to Avaron, called Avalon by later writers, and then identified with Glastonbury; Joseph himself does not come to Britain. (Why a French poet would have the precious grail and its contents go to Britain is a mystery.)

The story of Merlin introduces several new elements to the Arthurian legend. One is that the poem purports to be from a book by Blaise, who was dictated to by Merlin himself. (The illustration above shows Marlin dictating while Blaise writes.) The element that most interests us right now is that of the last part of the poem: Arthur's fitness to be king results from being the only one who can withdraw a sword that has been sunk into a stone. This is the first time such an event was introduced into the Arthur story. It is not, however, the first time we have seen the image of a sword in a stone.

Yesterday's post on Saint Galgano told the miracle of the sword in the stone, and that the sword is still in the stone and viewable by all. This would have taken place by 1181, the year of Galgano's death. de Boron is most likely to have been writing after that date. Stories of a miraculous sword embedded in stone would certainly have spread, and since de Boron (and other writers about Arthur) seem to have no difficulty in adding fanciful elements to the legend, it is highly likely that de Boron took a legend that was spreading throughout Europe and imagined it as a test of fitness sent by divine powers.

But while we are in the subject of the Grail, did you know it was once thought to be a stone? One more dip into the fanciful before we return to more grounded topics.