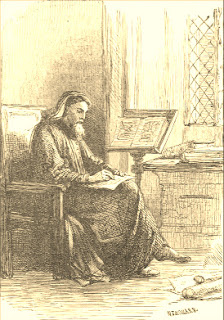 On the 28th of May in 1378, a small expedition of 16 men set out from the City of London. In the financial records that manage their pay, only two of the men are named. One was the chamber knight Sir Edward de Berkley; the other was Geoffrey Chaucer. Berkeley was paid 20 shillings per day and had nine attendants; Chaucer, only an esquire, had five attendants and made 13 shillings and four pence per day. The royal accounts list their purpose as meeting with Bernabò the Lord of Milan and with John Hawkwood.

Why was Chaucer chosen for an embassy of some sort to Italy? He had been there already in 1368, when he was in the household of Prince Lionel, younger son of King Edward III, and was arranging the marriage of Lionel to Violante Visconti, daughter of Galeazzo II Visconti.

Royal marriages between countries were always valuable for alliances, and England was glad to have an ally on the Italian peninsula in its on-again/off-again hostilities with France. Chaucer would already be familiar with the roads traveled, and probably the language. He might also have asked to go, having likely had a taste for himself of the magnificent library started by Galeazzo.

Bernabò's reputation for his willingness to fight anyone was well-known, and so allying with him was a wise move. (Although his endless antagonism of Pope Urban VI was not to England's liking.)

As for John Hawkwood, an English mercenary, he was in command of part of Milan's forces. Not only did he have an excellent reputation as a fighter and leader, commanding high prices for his service, but he had the year before married Donnina Visconti, daughter of Bernabò. That Donnina was illegitimate did not make the familial bond between Hawkwood and his father-in-law any less firm.

We do not know the exact purpose of the trip, although securing potential military support on the continent seems likely. It lasted 115 days, with Chaucer and Berkeley returning to London on September 19th. London to Milan is about 800 miles, and the routes were well established by then, but it would still be over a month of travel one way. Do you suppose they told stories to each other to pass the time?

I have written about Hawkwood before but, as with anyone, there is a lot more to his story that I'd like to tell you. So I will.