The Origin of the Grail, Part 1 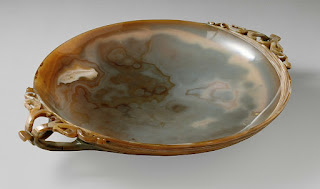 The first mention of a grail was in the Old French Perceval, le Conte du Graal ("Perceval, the Account/Story of the Grail") by Chrétien de Troyes about 1190. Perceval was a young man raised by a single mother in the wilds of Wales. One day he encounters a group of knights and decides he wants to become one. His mother is opposed to this, but he sets out for King Arthur's court.

He is mocked by Sir Kay, but Perceval manages to kill a knight that has been a problem for Arthur. He trains under a knight, rescues and falls in love with that knight's niece Blanchefleur. He goes back to visit his mother, along the way encountering the Fisher King, at whose castle he spends the night. During a meal there he sees a procession: first a young man carrying a bleeding lance, then two young men carrying candelabra, then a young woman carrying a fancy golden serving dish (the grail), then another young woman with a silver platter.

When he wakes the next morning and heads home, Perceval sees a young girl mourning, who tells him that if he had asked about the grail, the wounded king would have been healed. He goes home and discovers that his mother has died. Later, after he has joined Arthur's court, a "loathly lady" enters and criticizes Perceval for not asking about the grail. A later short passage has a hermit explain to Perceval that the grail held a host (presumably from the Christian Mass) that sustains the Fisher King's father, who is wounded. (This link to the Christian Mass made it easy to equate the grail with a chalice.)

Chrétien did not finish the poem; the patron for whom he was writing it, Philip I Count of Flanders, died in 1191 while crusading at Acre. What he might have done to further the significance of the grail and the wounded king is unknown. Other writers, however, were happy to seize on the image of the grail and run with it, such as Robert de Boron in the previous post.

We will check on other writers who picked up where Chrétien left off.