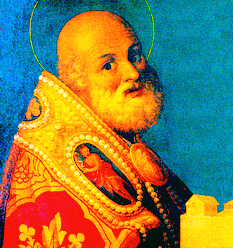 Although St. Patrick gets credit for spreading Christianity widely in Ireland, he was not the first Christian sent there for that purpose. He was preceded by Palladius (fl.408 - 431; died c. 450 CE), the first bishop of Ireland.

Some of what we know from him comes from accounts of St. Patrick, who was his contemporary, along with St. Prosper of Aquitaine. Palladius came from a noble family in Gaul, and had a wife and daughter. We don't know what happened to the wife, but at one point, after becoming an ascetic, he placed his daughter in a convent in Sicily and in 415 was ordained a priest. He seems to have lived in Rome from 418 - 429; we assume he is the Deacon Palladius who convinced Pope Celestine I to send a bishop named Germanus to Britain to fight growing Pelagianism.

Celestine also sent Palladius with relics of saints Peter and Paul to be the first bishop of Ireland. According to a later account, the Book of Armagh, Palladius had a difficult time in Ireland: the natives did not want his preaching, and he did not want to live in a strange land.

After 431, he went to Britain and served among the Scots for 20 years. Scottish historians acknowledge that Palladius was the first bishop and "first apostle" of Scotland. There are several dedications in the village of Auchenblae suggesting he spent most of his time there, and perhaps died there in 450.

We know more about the Germanus sent to Britain; he's next.