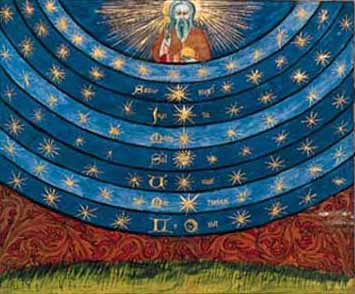 Nicholas Oresme (c.1325-1382) likely came from humble beginnings; we assume this because he attended the College of Navarre, a royally funded and sponsored college for those who could not afford the University of Paris. He had his master of arts by 1342, and received his doctorate in 1356. He became known as an economist, philosopher, mathematician and physicist.

One of his published works was:

Livre du ciel et du monde
(The Book of Heaven and Earth)
In this work he discussed the arguments for and against the rotation of the Earth.

Years later, Giordano Bruno (1548-1600) wrote his theories out in a way so similar to Oresme's that it is assumed he had access to Oresme's writing.
Posted by Daily Medieval at 7:30 AM