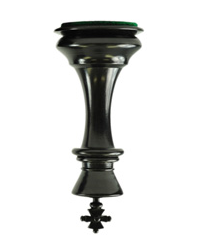 Rudolph of Swabia was referred to as an anti-king after he was defeated by Henry IV in 1080. Anti-popes are a common concept in history, but were there enough anti-kings to justify a label? Can't we just call him a usurper?

There were actually quite a few anti-kings in the Middle Ages. One of the earliest was Duke Arnulf "The Bad" of Bavaria, who spent 919-921 claiming he was the alternative to King Henry "The Fowler" who was the first king of the Ottonian dynasty in Germany. After Henry defeated Arnulf in battle, he allowed Arnulf to keep the title of Duke of Bavaria so long as he renounced forever his claim to the German throne. Arnulf wised up, and did not create any more trouble, dying peacefully in 937.

Rudolf of Swabia was an anti-king who has already been referenced when discussing Holy Roman Emperor Henry IV and his conflict with Pope Gregory VII. When Henry was out of favor, German aristocrats decided to elect an alternate, Rudolf, who lasted from 1077-1080. After he died in battle, Hermann of Luxembourg (also called "of Salm") took a chance. He lasted longer than Rudolf, from 1081-1088, but had to flee to Denmark in 1085. He returned in an alliance with Duke Welf of Bavaria, Rudolph's successor, but soon tired of the constant struggle (and being a pawn of the pope and German lords) and retired to his home. He was not heard of after 1088; we assume that was the year of Hermann's death.

The Germans either had a difficult time accepting their anointed rulers, or they just liked creating conflict. Several Holy Roman Emperors had to deal with anti-king challenges, right up until the mid-14th century!
Posted by Daily Medieval at 7:42 AM