The Dome of Holy Wisdom 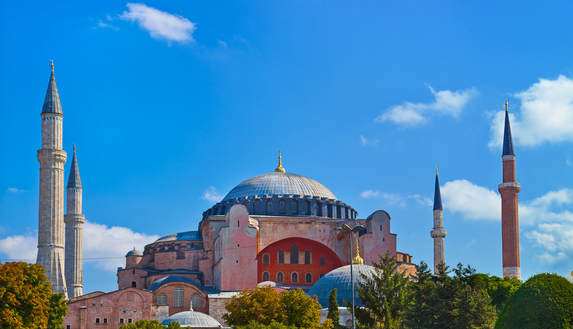 The greatest church in the eastern Mediterranean was the Hagia Sophia [Greek Ἁγία Σοφία - "Holy Wisdom"] in Constantinople. The first church on the site was dedicated in 360 CE, and has served as an Eastern Orthodox Cathedral, as a Roman Catholic Cathedral (from 1204, when the Fourth Crusade captured Constantinople, until 1261), as a mosque (from 1453  until 1931), and as a museum (from 1931 until the present day). It was the largest church in the world until 1520, when the Seville Cathedral was built.

When the original church was burned down during rioting,* Emperor Justinian I ordered construction of the current building in the 530s. He employed the talents of two men—we would call them "architects," although contemporary documents refer to them as "mechanics"—named Isidore of Miletus and Anthemius of Tralles. He insisted that they make a flame-proof building, so they designed it with stone and brick-and-mortar, bound in some places by iron, but with no wood anywhere. There are other dangers than fire, however.

On 7 May 558, the dome of the Hagia Sophia collapsed during an earthquake. It was rebuilt by Isidore the Younger, a nephew of Isidore of Miletus. This time, the design included 40 ribs as support, and a dome that was six meters higher. Unfortunately for the dome, the walls were constructed of less brick and more mortar, and built too quickly—they should have let the mortar cure longer in each layer before adding the next—and were consequently not as strong. The new dome also experienced collapses. The current dome contains a north section of eight ribs and a south section of six ribs from the original.


*Constantinople had two political factions, called the Blues and the Greens; their rivalry frequently became violent, resulting in property damage
Posted by Daily Medieval at 9:05 AM