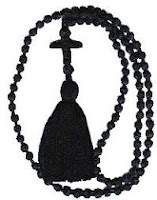 When your religion is centered on a holy text, and a majority of the population cannot read, how do you bridge the gap between a devotional spirit and the obligation to  certain prayers? A prayer rope.

The creation of the prayer rope, the use of which arose with monasticism in Egypt in the 3rd or 4th century CE, is attributed to St. Pachomius. Considered a precursor to the Christian Rosary, it gave early monks a mnemonic device for achieving their daily prayer goals.

The prayer rope was a circle of knots, intended to be fingered as one went through the daily devotions. Carrying it by itself was a reminder to pray, but the knots would remind one of the specific number of prayers needed to meet a daily obligation. Prayer ropes have been found with as few as 10 knots (and wearable on a finger) and as many as 500. Some numbers can be assumed for a reason: 33 for the years of Jesus' life, for instance, or 150 for the Psalms. Beads are sometimes present at intervals along the rope.

Construction of a prayer rope was not a random act. They were usually made from wool, to represent Jesus' flock. A cross was attached to the place where the two ends of the rope were joined, with sometimes a tassel added. Although traditionally a black rope to represent our sinful state, the tassel often had red in it, to represent Jesus' blood. When weaving and knotting one, the maker should be praying the entire time.

Not to be worn as a necklace or dangling from one's clothing, the rope is carried wrapped around the left wrist. When in use, the left hand holds the rope, counting the knots between thumb and forefinger. The right hand is left free to make the Sign of the Cross.

The prayer rope is still in use in many parts of the world.
Posted by Daily Medieval at 7:00 AM