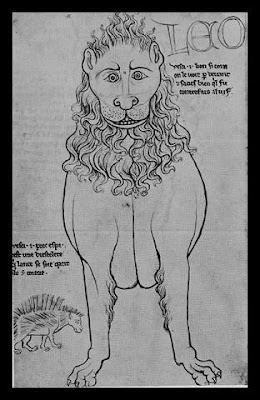 The Fibonacci series, mentioned here, has been found to correlate to patterns found in nature. There is no evidence that Fibonacci himself ever made the connection between his arithmetical progression and the world around him, but the link between math and nature was recognized in other ways in the Middle Ages.

There is a unique manuscript called "The Sketchbook of Villard de Honnecourt." We know nothing about Villard except what can be gleaned from the internal evidence of this manuscript, which seems to be a notebook of his travels and interests. MS Fr 19093 now is in the Bibliotheque Nationale in Paris; it has been extensively copied and studied since it became widely known in 1849.

From the language and the 250 drawings found in his 33-page manuscript, we assume he was an architect from Picardy in northern France (there is a village called Honnecourt-sur-l'Escault in Picardy), traveling in the early-to-mid 1200s. Although architectural features make up the majority of his sketches (and presumably his interest) by far, there is no documentary evidence that he ever was connected with the design or construction of a building; nor did he sign his name with a title such as "master," to which he would have been entitled had he trained as an architect.

Still, he seems particularly introduced in buildings, drawing detailed façades of Laon and Reims Cathedral, a clocktower, the geometry of buildings; but he also depicts animals and insects, sculptures and mechanical devices such as a trebuchet, a machine for lifting heavy objects, a self-operating saw, a crossbow that never misses, and a perpetual motion machine. Alas, he draws them without explaining how to make them work.

Some of his notes, such as the one attached to the Lion shown above, are suspect. It is a very good drawing, but the caption tells us "Here is a lion seen from the front. Please remember that he was drawn from life." It seems unlikely that he saw a lion himself. The porcupine on the same page has the note "a little beast that shoots its quills when aroused," which tells us that he was getting his information from traditional bestiaries, not from real-life observation. On the lion's face you can still see the faint symmetrical guidelines he drew to start the artistic process.

Sketching guidelines was not an unusual start for medieval artists. Villard, however, offers us several examples of the correlation between geometry and representations of organic figures. Shown to the right is Page XXXVI of his manuscript, in which he shows how geometry fits into faces and figures.

His note in the bottom of the page depicted here says "Here begins the method of representation as taught by the art of geometry, to facilitate work. Elsewhere you will find the method of masonry."

A brief video showing some of his pages is here: