One of the men who went on the Third Crusade (talked about here and here), wrote accounts of some of the events of that adventure, notably The Fall of Jerusalem, 1187 and Laws of Richard I (Coeur de Lion) Concerning Crusaders Who Were to Go by Sea. He didn't witness the Fall of Jerusalem himself, however, having gone over with Richard I in August 1190 and returning to Europe in August 1191 with Phillip II of France.

Roger of Hoveden (d.1201?) was unknown to history until 1174, when Henry II sent him on a secret mission to the lords of Galloway in southwest Scotland. His name suggests he was born in what is now called Howden, in Yorkshire. His death date is inferred from the fact that one of his historical works, called the Chronica, breaks off suddenly at 1201.

The Chronica (Chronicles) is an attempt (like the Anglo-Saxon Chronicle) to create a comprehensive history of England. For the parts of English history preceding his own life, he mostly just copies earlier works. From 732-1170, he uses other works. From 1170-1192, he copies his own earlier work, the Gesta Henrici II et Gesta Regis Ricardi (Works of Henry II and Works of King Richard).* The Gesta is the best evidence that Hoveden must have been well-connected at Henry's court: he shows detailed knowledge of political events, and is more sympathetic to Henry's side in the ongoing disputes between Henry and his sons and others. From 1192 until its abrupt end in 1201, the Chronica (along with the Gesta) is a valuable tool for understanding some of the changes in England's constitutional development.

Here is an excerpt from the Chronica for 1183, with what might seem an interesting puzzle: 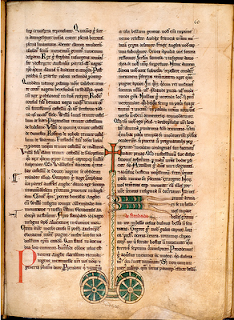 In the year of grace 1183, being the twenty-ninth year of the reign of king Henry, son of the empress Matilda, the said king of England was at Caen, in Normandy, on the day of the Nativity of our Lord; the king also, and Richard and Geoffrey, ... . After the Nativity of our Lord, the king ordered the king, his son, to receive homage from Richard, earl of Poitou, and from Geoffrey, earl of Brittany, his brothers; on which, in obedience to his father, he received the homage of his brother Geoffrey, and was willing to receive it from his brother Richard, but Richard refused to do homage to him; and afterwards, when Richard offered to do homage to him, the king, the son, refused to receive it. Richard, feeling greatly indignant at this, withdrew from the court of the king, his father, and going to Poitou, his own territory, built there some new castles and fortified the old ones.

Does it seem to you that there are two kings mentioned here? There are. Tomorrow we'll look at when England had two Kings Henry at the same time.

*This work was originally attributed to Abbot Benedict of Peterborough, because his name appeared on a copy in Benedict's library. Benedict's library-building habits are well-known, however, and evidence exists that he had a copy of the Gesta made from its original source.
Posted by Daily Medieval at 4:00 AM